I have both dudes and catastrophes

I'm a project manager now, I'm slowly realising. It's not a career choice I'd recommend, but it has its moments. I recognise trace elements of them in the words of Cornelius:

It's a bit like manning a joystick at Cape Canaveral: lovely equipment, men on task, and always the promise that things which go awry are capable of going so awry that the course of a federal program is altered forever.

Note for the unitiated: Cornelius is a resident of Achewood, an online comic invariably described as being beyond description. It's good, though.
Posted by Jon at 9:14 AM 2 comments:

Noted for future use in the workplace 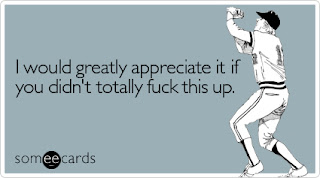 (Somewhat to my surprise, this doesn't appear to contain spoilers. So go ahead and read if you haven't finished it, although it'd be a far better use of your time to actually play it.)

Bioshock's hype machine started to get silly a couple of weeks ago. It jumped the shark when culturally bankrupt games sites better known for hosting flamewars about Ghost Recon weaponry started comparing it to Crime and Punishment. It reached critical mass when the fact somebody didn't give it 10/10 got on the Digg front page. And now the backlash has started.

A very heavily qualified, very discreet backlash, mind. I've yet to see anybody outright hate it, and it doesn't seem to be clad in the same neo-imperial clobber as Black and White. But the current vibe, after months of rapturous (ahem) proclamations of Ken Levine as the saviour of modern gaming, is to list all the things that are wrong with it. I agree with quite a few of them, but I'm going to start with what I liked - I worry I'll forget them later.

- The setting is excellent.
- The soundtrack makes it even better.
- It subverts the FPS genre. Not to any end, alas, but full marks for trying.
- It made me feel genuinely bad about things I had done in the game.
- Death was something I worked to avoid, but it was never a setback. As is my habit, I created dozens of savegames. I only used two, and both times I didn't really need to.
- It had a big, stupid boss fight at the end that I completed on the second try. I didn't like it much, but I didn't have to spend hours repeating it and honing my hatred into white-hot fury in the process.
- It's a game world not populated exclusively by Americans.
- It's prompted online debate about determinism, objectivism and the nature of Utopia. Which isn't unheard of, unfortunately, but this time the debaters aren't obviously insane and the inspiration isn't utterly laughable.
- It was a conspiratorial event. In common with a lot of people I know, I wanted to get through it before it was spoiled; we've spent a week discussing the points in the game as I reached them, all the while doing a very careful conversational dance to make sure that you don't reveal something the other party might not know yet. It's been a long-distance co-op, and the conspiracy of we who have finished it among those who haven't has added to the experience: whispered conversations in the corner at a party, late-night MSN conversations, and kitchen chats with my housemates have made it feel more significant as we've been carried along by the Cult of Rapture. It's something I can thank the marketing team for as much as the developers, but I don't care: it was nice, and all too rare, for a game to be a moment for people to share.
- Gags that Graham spots and I don't: 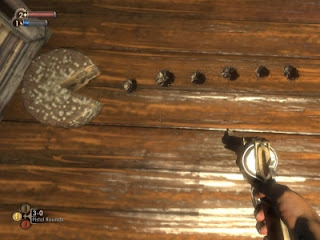 Perhaps the best thing is that it's a reasonably intelligent game that has - if early sales are anything to go by - been a massive success. Please, God, let it outsell generic tat by such a margin that publishers are convinced of the need for this level of craft. And while you're at it, make sure that the inevitable sequel is a spiritual successor rather than a narrative one: Rapture was amazing the first time, but that twist, that final confrontation and those ultimate conclusions all mean it won't stand revisiting.
Posted by Jon at 11:18 PM No comments: