Something I've come across several times in London, but never remembered to look up afterwards - the sort of experience I suspect the iPhone is ushering into history, along with the pub quiz and bothering to describe individual music videos - is the announcement for Inspector Sands.

It goes out over the Underground tannoy system, in a style seemingly calculated for maximum creepiness: a very loud, obviously pre-recorded loop of a well-spoken lady saying "Would Inspector Sands, please report to the operations room, immediately." It stands out a mile from the resigned, heavily-accented service updates you usually get, and runs on a permanent loop reminiscent of the "Base will destruct in X minutes" warnings at the end of 1970's Bond films.

It's very obviously a coded warning, but I've never seen anybody, staff or otherwise, pay the slightest attention to it. I'd secretly hoped this made it more secret and exciting, but now I discover that it's just a fire alarm warning and not a very important one at that. An alleged TFL worker in the comments says that it's just a first-stage warning - it's not until two separate fire alarms are triggered that it steps up to the more obviously significant "please evacuate this station immediately". As such, it's recommended that if you do ever find a fire, be sure to trip two alarms because nobody will take it too seriously otherwise.

UPDATE: The inestimable John Walker points out that this has been spoofed to good effect by Mitchell & Webb, and has posted the clips on his site.

Other tips: the "please evacuate" drill is used any time they want people to bugger off, so don't panic too much if you ever hear it, and "if you need to stop an oncoming train, hold both hands over your head while looking at the driver." The commenter helpfully advises not to stand in front of a train while doing so. All handy tips for urban living.

In other vaguely-related news, this is pretty awesome:

Wedding cake, over here!
Ring-exchanging!
You may vomit on the bride
You have startled the mother-in-law!
Posted by Jon at 8:31 PM No comments:

UPDATE: Because I am in a position to indulge daft whims like this, OXM actually tapped up a cocktail waiter to create a series of gaming cocktails. Remember, kids, you can do this sort of thing too if you grow up to work in media.
Posted by Jon at 1:41 PM No comments: 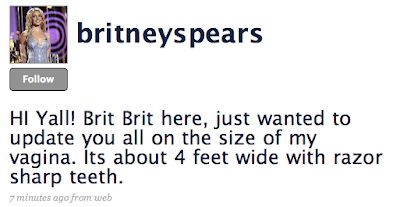 I'm a big fan of Twitter, these days. This isn't the reason, but it could have been.
Posted by Jon at 12:51 AM No comments:

"This is exactly the kind of things you said you are looking for. You have two and a half years until the release of the film, the budget is fixed and large and the promotion will be huge."

"What's bigger than Kong with the director coming off Lord of the Rings?"

"Something with a fixed release 2 years out, guaranteed marketing budget in excess of USD 80 million and guaranteed sequels."

"Wow, that's a tall order. King Kong is kind of unusual though, is it worth an exception."

Small wonder that Flash minigames are more de rigueur for marketing purposes at present.
Posted by Jon at 10:34 PM No comments:

This made me smile: The Onion's Nathan Rabin points out an old interview in which Amy Heckerling makes the mistake that interviewees should never, ever make:

AH: Did you see the movie?

O: [Pauses; makes "don't ask me that question" gesture.] Um... There were parts about it that I liked. There were things I liked about it. [Note: This is a lie. —ed.] And it was short. You know? Really short. Only, like, 83 minutes.

I usually do better in these circumstances, although otherwise I'm a terrible interviewer. I've always known this, and have been reminded this week by other people transcribing interviews I have done pausing occasionally to look at me with quizzical, sad expressions at the nonsense I am putting to the luminaries of the games industry.
Posted by Jon at 1:38 PM No comments:

Three Stories From 'The Onion' That Came True

The final one is the scariest. It's like a bullet-point list of everything Bush has done wrong, written years before it happened.